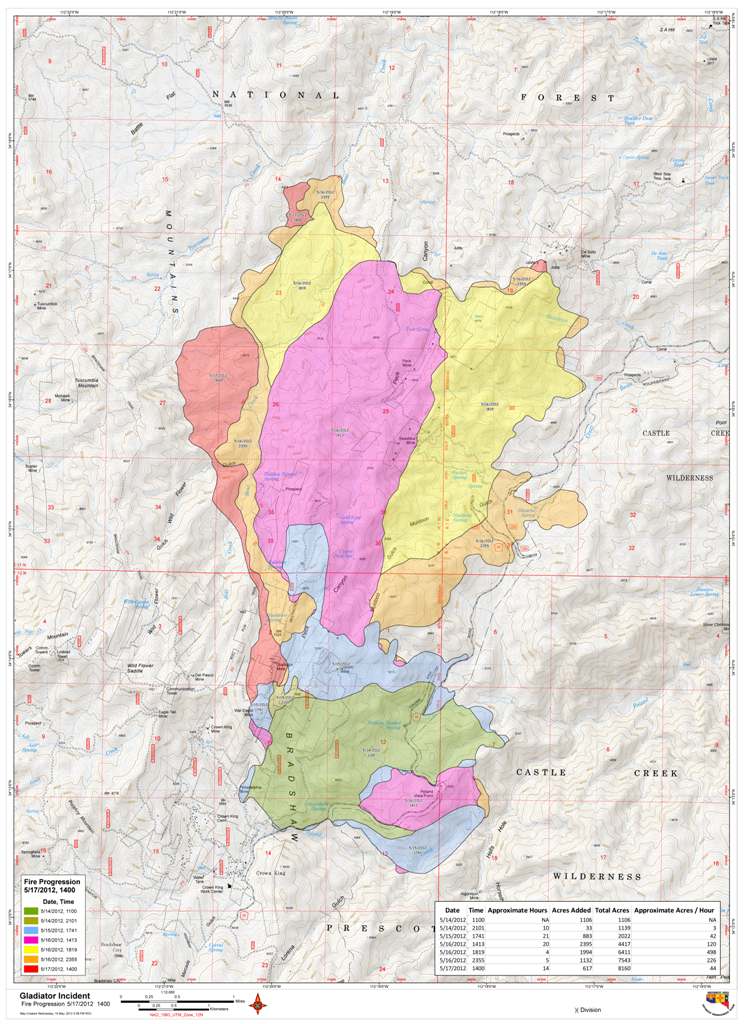 The Gladiator Fire has been burning north of Crown King, AZ now for 6 days.

Good afternoon everyone.  Sorry for the delay in the update.  There will be two parts of this update, the first being the official status of the fire as reported by incident command and the second being what I witnessed when driving up a replacement generator last night to town.

The Gladiator Fire is currently the number 1 priority fire in the nation and as many resources as possible are being directed towards saving Crown King.  As of last night there were more than 700 firefighters battling the Gladiator Fire north of Crown King.  140 more fire fighters are expected to arrive today to assist in the efforts.  As we stated yesterday, the crews are pulling off the immediate lines and are working on creating much larger fire breaks further out in front of the fire.  The plan now is to stop the fire at the Goodwin Rd on the North Flank and Senator HWY to the West.  Today is expected to be the windiest day yet so expect lots of smoke in the air when looking towards Crown King.  Crews are still worried about it flanking around town on the West side and coming in town.  Cleator may be asked to evacuate in the next day or so as the fire is getting closer to their town.

As I mentioned in the last post, the generator in town that had been supplying the Crown King General Store and the Crown King Fire Department started going out.  We were able to track down a 60k generator from Empire Cat after hours and take it up to Crown King last night.  A huge thank you to Empire Cat Rentals that returned to their shop even though they were closed and got us a rental generator we could take up.  We arrived in Mayer around 10pm to get our pass to go up the hill and arrived in Crown King around 12:30am after being processed at all the different checkpoints.

the fire lines.  The fire is definitely burning closer to Cleator than I expected.  It is also burning very hot on the North side of the Desoto Mine.  The area just before the first switchback has all burned as well as the canyon that is overlooked by the Peck and Swastika Mines.  At midnight the fire was still burning extremely hot and tall flames were seen all over the canyons.  It has crossed to the road to the East of the switchbacks and is burning there.  While it was very dark out and we couldn’t see beyond 10ft off the side of the road we tried to get the best idea of where the fire had burned.  There were a number of spots that had burned entirely going up but there were also plenty of spots that hadn’t.  With it being dark, we could see the glowing embers in the night to get an idea of where the hot spots were.  Once we went the the sharp curve known as “Grapevine” and “Peanut Butter Pass” we couldn’t see any active fire hot spots all the way in to town which is good news.  There was one or two little flickers of light down in Hell’s Hole, but nothing like I was expecting.  The majority of fire activity at least near the road was further from town than i was expecting.  I believe hat the fire crews do have that Southeast flank contained as they are reporting.

Once in town, Crown King looked as great as ever, just much darker.  There were two Yavapai County Sheriffs Officers at the General Store.  The town was very quiet but then again it was also very late.  The good news was that from the front porch of the

Crown King General Store you could not see and sign of fire last night.  No glowing sky, no smell of smoke, nothing.  We know the fire is still closer to town than we could tell, but it was refreshing to feel like the town was going to be safe. We were able to get the generator connected and left town around 3am and returned to Phoenix around 5am.  It was a long night but the generator will be more than enough for what is needed.  A big thank you to Carl Schaffer who helped find the generator and drive it up to town.  Watch the first video on Day 2 Update 3 for info on Carl’s house and how it was protected from the fire by designing it to withstand forest fires.   Also thank you to the Arizona Virtual Jeep Club that posted our request on their page and many members of their group were helping look for a generator.  We are excited for their next run to Crown King.

As soon as it is deemed safe they are working on getting residents to return as soon as possible, but that is going to be a few days still.  I imagine that as long as the fire is burning along the main road to town, it will be too dangerous for them to open the road.  Also they are making sure that they don’t let us back, only to have the fire flank the West side and have to evacuate again.

The two maps being used show both the general area view of the fire as well as the fire progression chart so you can see where the fire has burned each day.  I will be doing another Google Earth flyover video later today as well as providing updates about the fire and its activity today.  Remember we love to read your comments below as well as appreciate you sharing our page on Facebook.