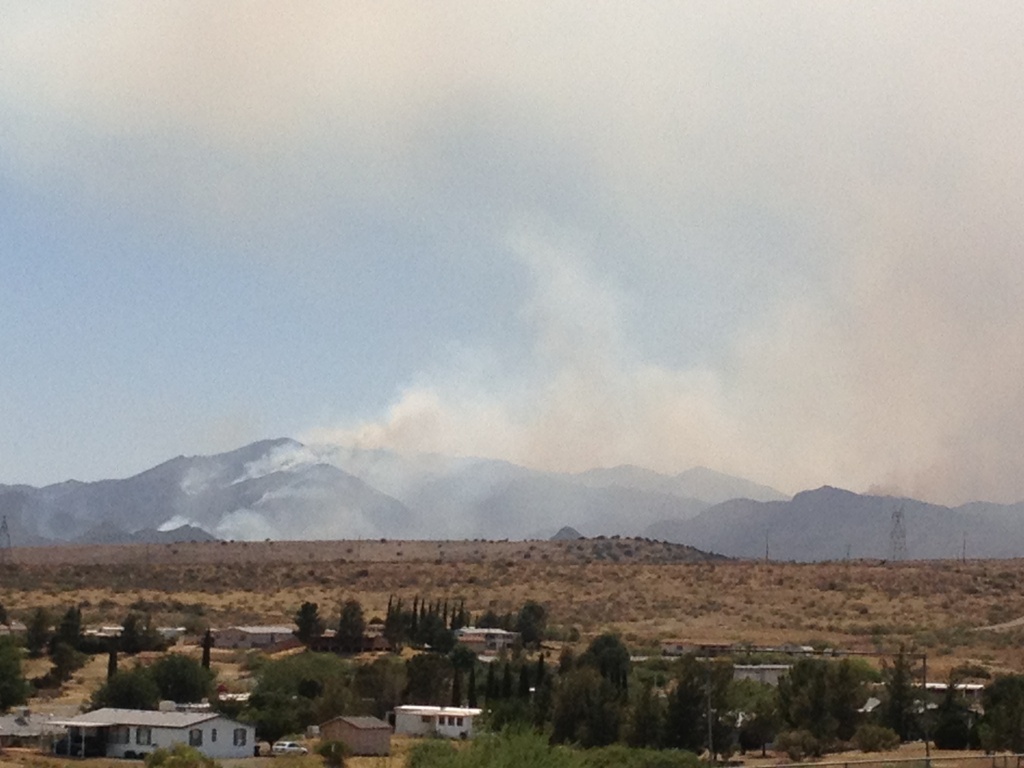 A number of people have wanted to know more about who “we” are and why we are posting such detailed footage.  Ben and Carol Boles have owned the Crown King General Store in Crown King since 2004.  Carol also sells a large amount of cabins and land around Crown King as Branch Manager and Co-owner Firebird Realty.  Ben and Carol’s daughter Jackie Briggs, is the Designated Broker and Co-Owner of Firebird Realty and runs our office in Phoenix, Arizona.  Jackie was just this week named one of the National Association of REALTORS® Top 30 agents under the age of 30 in the entire country.  The person writing all these posts about the fire is Dane Briggs, Ben and Carol’s Son-In-Law (married to Jackie) and works in the Phoenix area as a real estate agent as well.  Dane is an avid outdoorsman, and technology guru.  Which is why he has spent hours updating this site throughout the Gladiator Fire incident.  He has hiked and off-roaded in almost all of the areas being affected by the Gladiator Fire.

We haven’t yet posted a single plug for our companies, but with a slow news day, figured it wouldn’t hurt.  If you are looking at buying or selling Real Estate in Crown King or Phoenix, give us a call and see if we can help you out.  Also, every year we put on a charity event at the Mill Restaurant in Crown King benefiting the Child Crisis Center.  This year’s Wine in The Pines was scheduled for June 9th, but will most likely be postponed to then of July or early August due to the fire. Make sure you check out www.WineInThePinesAZ.com for more info on the new date if you are interested in coming.

If you live in Arizona you probably recognized how windy it was today.  Wind gusts around Crown King and the Gladiator Fire were reported to be in excess of 50mph.  These strong winds not only grounded Air Tankers for the majority of the day but also helped drive the fire further to the Northeast.

Today the communities of Pine Flats and Turkey Creek were evacuated as the Gladiator Fire moved closer and closer.  Type 1 helicopters continued to attack the fire from the air as much as possible and continued to do so until 7:22pm.  The only good news of the day is that winds are expected to lessen over the weekend and an increase in humidity is also expected.  This will help fire crews gain control over the Gladiator Fire in the coming days.  The size is currently estimated at 9,900 acres and is expected to continue to grow.

We will be posting another update this evening most likely with another Google Earth fly over tour explaining where the fire is burning as we did yesterday. To view that video visit our post Day 5 Update 3. The other good news while not official is that it appears more and more with each passing day that the town of Crown King will be saved from the fire.  The fire is still the number one priority wildfire in the country.

An important thing to remember is that while the fire is still only 5% contained, this does not mean that the fire crews are not making progress.  The containment lines are getting bigger ever single day, the problem is so is the fire.  Which is what is causing the containment to remain at 5%.  Think of it as a 100ft long line.  5% of that is 5 feet.  Well when that line grows to 1000ft, 5% is 50ft.  So the crews are continuing to increase the areas of the fire that are contained, but as the fire continues to grow, they are having more area to fight.  Hope that explains the containment questions that have been raised.

Also, there have been some questions about the Summer homes at Horsethief Basin.  While we are not an official source, based on what I saw last night on my trip up the mountain, I would say that the summer homes in horsethief have nothing to worry about at this time.  It would take some severe wind changes and something drastic for them to affected.

Below is a couple of video clips from newscasts this evening on the Gladiator Fire.