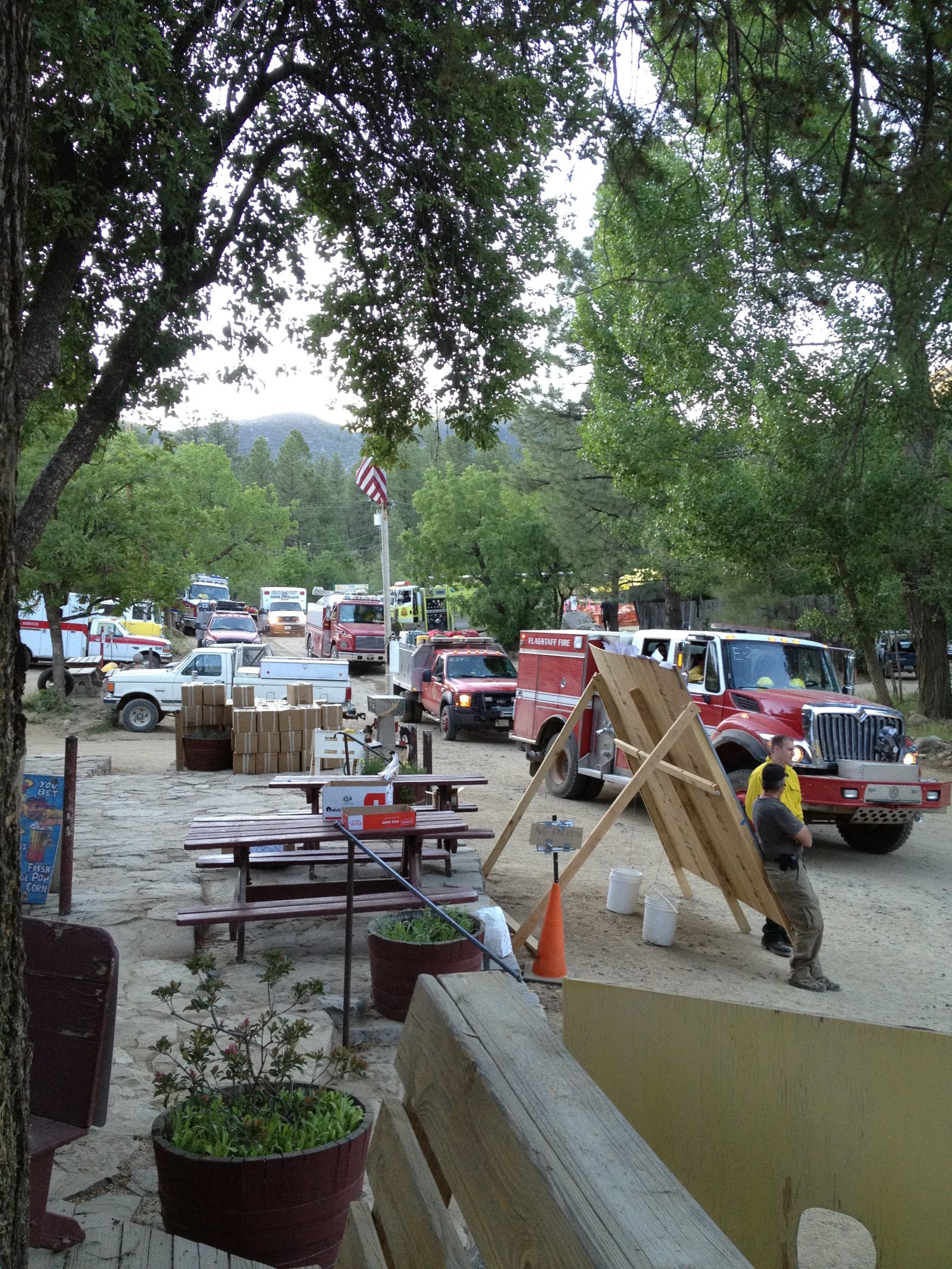 Sorry for not posting an update yesterday.  Nothing particularly news worthy happened with the Gladiator Fire yesterday and I was busy with real estate.  Here is the update I have been promising including pictures from my drive up the mountain on Tuesday. Reminder: You can click on any of the photos to enlarge them.

The Gladiator Fire was started on Mother’s Day, Sunday, May 13th, 2012 at 11:00am from a structure fire that spread to the neighboring property.  It is currently estimated at 16,222 acres and is 30% contained.  The  South, East and Northeast sides of fire are being reported as being contained.  The majority of the firefighting efforts are now focused on the West

and Southwest sides of the fire along Senator Hwy. Currently there are 1,146 people working on helping contain the Gladiator Fire and so far 7 injuries have been reported.  In the areas that have cooled off, rehabilitation efforts have begun with a Burned Area Emergency Response (BAER) Team.  We will have another update soon regarding the work the BAER team is performing.   APS has begun work on restoring power to the town of Crown King.  It is expected to take a number of days to replace the roughly 20 power lines that were destroyed in the fire.

Comments from my drive to Crown King on Tuesday, May 22nd:

On Tuesday I was given access to go to Crown King to deliver the new generator for the Crown King General Store and retrieve the rental unit that we had taken up there last week.  I have to give credit to the Incident Command team, they are doing a stellar job taking care of our town and the 1,000+ people that are working on the fire.  Leaving Spring Valley on the dirt roads to Crown King, I noticed a new temporary heliport that has been fashioned in the desert outside of Spring Valley.  There were three helicopters stationed there.

Driving up the road to town the first sign of the fire up close is around the area before the first switchback.

The entire area around “Pee Rock” and the road to the Swastika and Peck Mines has burned.  Surprisingly the immediate area around Switchback 1 was saved.  Switchback 2 is one of the areas that the most fire damage can be seen.  The entire area is what they call moonscape.  All signs of vegetation have burned and only a few charred tree trunks can be see sticking up from the black dirt.  The area looks completely different as normally the vegetation restricts your vision to the areas beyond the road, now you can see for miles.  You continue to drive in and out of burned areas past switchback two towards Switchback three.  The washes below switchback 3 have burned as well.  Switchback 4 looks pretty much the same.  After you make the hard 90 degree right turn before Peanut Butter Pass and the Lookout Vista you run into more burned area.

The area around the lookout point has not burned.  The hill at the helipad has some burned areas on the North Side, but much of the surrounding area is the same.  This was all area burned during the Lane 2 Fire and the fire probably didn’t have enough fuel to really spread in this area.  After the helipad on the final stretch towards town, much of the area on the North side of the road has burned especially as you get closer to town.

There are a number of areas you can tell will be an issue for erosion during the first big rain storm we get in town.  The good news is that once you get to the Magic Bridge there is no sign of the fire.  The pines immediately past the Magic Bridge are all standing and are as green as ever.

It is a great feeling to get in town and have it look pretty much the same.  From town, you can’t see much evidence of the fire besides the red lines made from the Slurry Bombers that were making drops on the ridges North of town.

APS had numerous crews working hard at a number of locations along the road up.  I counted at least 12 APS vehicles and you could see them working on actively replacing power poles in the burned areas.  I am sure it will take them a few days to complete the work, but it is good to see them already working towards restoring power to Crown King.

In town, the General Store has been converted into a “Spike Camp.”

There is a large 8’x8′ board with the latest fire map posted, and crews were having meetings discussing strategy.  The side patio of the store has been converted to the dining area.  That night crews were having a steak dinner and were enjoying the food under the lights that have been strung around the patio.  Main street was lined with fire engines from all over the state and surrounding states.  There must have been close to 20 fire trucks in town.  Crews are camped out along the road between town and Senator HWY.

The General Store opens around 6pm which is shift change.  The crews in town get supplies and refreshments and headed out to the fire lines along Senator HWY.  The store stays open till after 10pm so as the day crews come back in town they have a chance to get supplies.  It was nice to see everything operating so smoothly.

From town I could only see a few columns of smoke from the areas burning near Towers Mountain.

Hope that this update gives everyone a sense of relief.  Our town is still there and looks just as amazing as always.  Remember, we love to read your comments below, and appreciate you sharing this page with your friends or using the buttons on the left to like it on Facebook.

Also due to the fire and the uncertainty about when the town will be reopened. We have postponed our Wine in the Pines event to Saturday July 28th, 2012.  For more information on this event please check out www.wineinthepinesaz.com.  We hope to see you all in town soon.